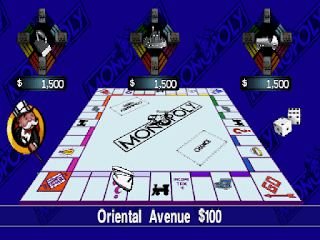 Genre: Strategy / tactics
Perspective: 3rd-person
Gameplay: Board game
Published by: Hasbro Interactive
Developed by: Gremlin Interactive Limited
Released: 1997
Platforms: PlayStation (PSX, PS1), SEGA Master System, DOS, SEGA Genesis / Mega Drive
Surely you have already guessed by the name that the masters from Hasbro miraculously turned the classic family board game into a completely identical digital version, combining all the nuances of the prototype game and several unique new touches that were introduced into the game by the creators of course with a single the goal is to give it a gloss of ideality, novelty and simplicity. It is very important that the appearance of the game is impeccable and its rules almost do not differ from the rules of the original board game, although, of course, you, as always with computer games, have the feeling that it would be better to play it live. Take at least the moment when you roll the dice: with the computer there is no specific feeling that you are lucky or that luck has turned away from you. This feeling goes away because you know: success or failure, so to speak, the layout of the cards, here comes from the computer, and not from you. Another innovation of Hasbro: all stops are completely removed to provide the game with such important characteristics for PSX owners as fun and entertainment, fun. Hasbro has done this in large part thanks to its amazing attention to detail. After you have rolled the dice, a series of FMWs (animated videos) will show how the piece you have chosen at the beginning of the game jumps and jumps over the cells marked on the virtual cardboard until it reaches its destination. At first it's pretty funny to watch this, but over time it gets tiresome, and the pace of the game slows down a little - in this case, there is an option to turn off boring videos.
There are also countless other functions that can be modified in one way or another according to your playing habits or momentary desires. Desiring to produce a game that would accommodate all possible variations, which would provide it with maximum flexibility in relation to the player, the team consulted with many people about the options in the rules, many of which, as it turned out, could be combined. And we will not twist our hearts if we say that the image of the symbols and their location on the playing field are presented to the players in their most ideal form and are convenient for the user in all respects. Hasbro should be proud of what it has accomplished on this project. A PC version based on a real-life game will certainly never be as entertaining as a live game, but what Hasbro has done is as close as possible to the real experience.
‹
›
Home
View web version