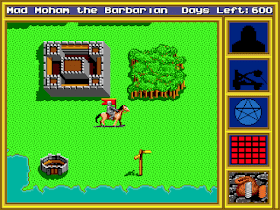 Genre: Strategy
Perspective: Top-down
Pacing: Turn-based
Setting: Fantasy
Published by: Electronic Arts
Developed by: New World Computing
Released: 1991
Platforms: SEGA Genesis / Mega Drive, DOS
Great turn based strategy. The progenitor of the great game Heroes of Might and Magic. So all fans of the game Heroes should like this game, because they have so much in common. You choose your character and start recruiting troops in various castles, taverns, etc. There is only one resource in the game - gold. But you also need to increase the level of your leadership. Gather an invincible army and fight enemies. The main objective of the game is to find the stolen sceptre of King Maximus. He's hidden somewhere. To find out where it is buried, you need to catch the villains. To do this, conclude an agreement in one of the cities. Each of the villains has a piece of the map. After collecting all the pieces, you will find out where the scepter of King Maximus is hidden.
‹
›
Home
View web version