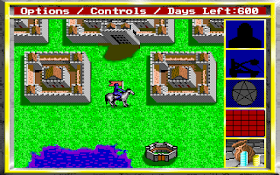 Genre: Strategy / tactics
Perspective: Top-down
Pacin: Turn-based
Setting: Fantasy
Published by: New World Computing
Developed by: New World Computing
Released: 1990
Platforms: DOS, SEGA Genesis / Mega Drive
Heroes Of Might & Magic, Warlords, Disciples, Age Of Wonders. Familiar names, right? But all this might not have happened, had not a game called King's Bounty released in the distant 1990s.
The game-pioneer of the turn-based strategy genre told about the misadventures of King Maximus: enemies stole a very important artifact from the ruler - the Scepter of Order - they buried it on one of the four continents of the kingdom, and the map indicating the storage location of the Scepter was divided into many parts and scattered around all over the country. Only a valiant hero can help to find the artifact and prevent the chaos that is growing every day. 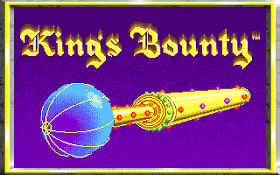 The player is free to choose a knight, paladin, sorceress or barbarian as his alter ego. Each of the heroes has its own army and its own characteristics, which have the most direct impact on the hero's progress along a long game path. The game path is not mentioned at all by chance: the construction of castles in King's Bounty is completely absent, instead the player will have a long and difficult journey, during which he will not only have to trample the horseshoes of a faithful horse, but also pretty much swim on the ship.
Castles are still present in the game, but only in order to capture enemy ones and receive paid quests from friendly owners. Money in King's Bounty is not a luxury, but a means of payment for all possible benefits, including the purchase of troops, military equipment, and a ship. A certain amount can be found in the chests placed on the game map, part of the funds goes to the player as a reward for defeating enemies, but the most impressive finances can be obtained only by completing quests. Tasks, as a rule, consist in finding the next part of the card, at the same time destroying its owner.
To do this, you need to face the enemy hero in a turn-based duel: two armies converge on a small battlefield and fight to the last remaining squad. It is noteworthy that the number of possible units in the hero's army depends not only on his financial condition, but also on his leadership qualities. And if the reputation of the commander is too low, then the warriors can easily betray at the most crucial moment and go over to the enemy side right during the battle.
Generally speaking, the gameplay of King's Bounty is many times simpler than the gameplay of its ideological successor, but this simplicity hides some absolutely fabulous charm that makes you come back to the game again and again. In 1990, there was simply nothing like it ... 256 colors. Sound coming from the PC Speaker. Exclusively keyboard control. King's Bounty is an everlasting hit that will forever remain in the memory of players. Not playing this game is a crime against computer games.
‹
›
Home
View web version