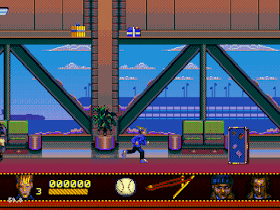 Genre: Action
Perspective: Side view
Gameplay: Platform
Published by: SEGA of America
Developed by: SEGA Interactive Development Division
Released: 1993
Platforms: SEGA Genesis / Mega Drive, Nintendo (NES)
Now Kevin is in New York and misbehaving there. With the help of baseballs (until you collect all the parts of the slingshot), he terrorizes the local population, and they reciprocate. With the help of pizza, you can replenish energy, you also need to collect various utilities.

A is a special action. Needed only at the first and sixth levels;
B - shot \ 6 dew;
C - jump.
If you press DOWN while running, Kevin will perform a slide.
‹
›
Home
View web version