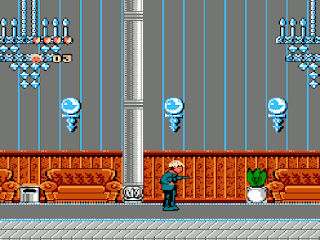 Genre: Action
Perspective: Side view
Gameplay: Arcade
Published by: THQ Inc.
Developed by: Imagineering Inc.
Released: 1992
Platform: Nintendo (NES)
Continuation of the game, created on the basis of the second part of the famous movie. Although, if you watch the opening intro, you will see a clear violation of the movie plot. The game bypasses the first part in all respects: both in terms of graphics, and in sound, and in interestingness - not so much as a game based on a movie, but rather as a platformer. To complete the level, you need to collect different items and use them. Hint - in order for the elevator to arrive, constantly press the call button.
‹
›
Home
View web version