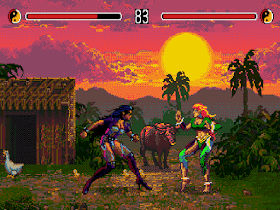 Genre: Action
Perspective: Side view
Gameplay: Fighting
Narrative: Martial arts
Published by: SEGA of America
Developed by: SEGA Interactive Development Division
Released: 1993
Platforms: SEGA Genesis / Mega Drive, SEGA CD / Mega-CD
Fighting with a story. Sounds incredible already, doesn't it? No, Mortal Kombat had a story, but for the most part it was just a reason to bring all the fighters together. After the third part, the plot went downhill, so much so that in the last part, released in 2011, they made a massive retcon. However, there was a fighting game in which the plot was from the very beginning, moreover, not bad. It was Eternal Champions, a 1993 game released by Sega herself, who thought it was time to have her own fighting game franchise.
So the plot is this: a being known as the Eternal Champion gathered nine people from nine different points in time who died before they could change history forever. He trained them in martial arts and organized a championship, the winner of which would be sent to their own time to prevent their own death and yet change history.

The graphics are quite good, neat, the sprites are quite large, there are more sprites of fighters in the Sega ports of SFII and MK, the character design is also pleasing - none of them are similar to the other, there are no palettes and head swaps. Although it still could have been prettier, especially with the choice of colors on the backs - it was too much graininess.
The sound is good too, some of the themes are even good (especially the main theme and the Xavier and Tyler themes).
The gameplay is interesting, but harder. There are six types of punches - three punches, three kicks. Kicks are hung on the lower (A-C) buttons, punches on the top. There are no show offs - the faster the blow, the weaker and vice versa. Much more fun is the case with superblows. Firstly, there are no usual for the Forward-Down-A genre here - strikes are performed either by pressing several buttons at the same time, or by holding the "back" button and then pressing "forward" or "up" along with any button. Secondly, super strikes can only be performed if there is energy in the super shock scale (represented by the yin-yang symbol on the interface). If you run out of energy - beat manually. Moreover, there are taunts that reduce the energy of the enemy. Energy is restored over time, but still, just pinching the enemy in a corner and hitting fireballs until you lose your pulse will not work. Further: in all the fighting games that I know, the opponent starts to make attempts to resist in the third or fourth fight, and this can only be called a fight in the fifth or sixth. This is clearly not the case here - if you do not know the tricks of your player and are unfamiliar with the EC combat system, then you should not even meddle in the championship - the computer will kick your ass in two minutes. Fortunately, the developers have foreseen this too - there are a great many training modes, so you can train properly before you fight back against the computer with due perseverance. Next: keep in mind that, just like in MK, the computer is a cheating bastard and its scale of super blows is not instructed to it. Further: in case of defeat, you will not be returned to the same battle, instead it will be thrown back two battles, so it's better not to lose. In case of defeat to the Eternal Champion, the game will end immediately.
‹
›
Home
View web version