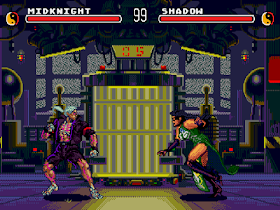 Genre: Action
Perspective: Side view
Gameplay: Fighting, Martial Arts
Setting: Cyberpunk / Dark Sci-Fi, Fantasy
Published by: Deep Water
Developed by: SEGA Interactive Development Division
Released: 1995
Platforms: SEGA CD / Mega-CD, SEGA Genesis / Mega Drive
Eternal Champions always strives to maintain a balance between good and evil in our universe. To achieve this, he must choose one of the nine dead warriors who had the best skill and talent of their own kind. These qualities will be restored and endowed with the power of the Eternal Champion to equalize the forces. If a fighter proves himself invincible, as a gift he will get a chance to return to life. "Only one can live to keep the balance. Let the competition begin ..."
This is an improved port with Sega Mega Drive with some new features: new movements, new characters, videos, high-quality sound and a lot of secrets on the levels. In the beginning, choose one of 13 heroes and go ahead - beat the face of the face to all rivals. As you progress, additional 12 hidden characters will open. They say this is the only game where graphics can boast of simultaneously displaying 256 colors on the screen.
Of course, it looks more like a Street Fighter clone, but somehow it does not hold out. Although, for the Sega CD enough! At one time it was a hit. It is recommended to fans of fighting games who are interested in the history of this genre.
A sequel was planned (continued) for Sega Saturn, but never appeared (due to disagreements between Sega of America and Sega of Japan; they say because of the fear of losing Virtua Fighter players).
‹
›
Home
View web version