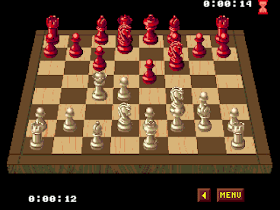 Genre: Strategy
Perspective: Diagonal-down, Top-down
Pacing: Turn-based
Gameplay: Board game, Chess
Interface: Point and select
Published by: PADIS Ltd.
Developed by: BS Comp.
Released: 1998
Platforms: SEGA Genesis / Mega Drive, PlayStation (PSX, PS1)
Another ingenious unlicensed game released in 1998, but this time not from the Chinese, but from the Russian company PADIS, known for its translations of the Sega Games into Russian. Since chess was not officially released on Sega Genesis, which is very strange, it was a good commercial move. The game is done quite well, and what can be difficult in the creation of chess. You can play both against the Computer (AI) and against each other. You can also choose to play in 3D (isometric) and 2D. The game has a fairly large number of settings.
‹
›
Home
View web version