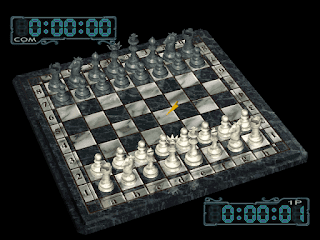 Genre: Strategy / tactics
Gameplay: Board game, Chess
Published by: Agetec
Developed by: Success Corp.
Released: 2001
Platforms: PlayStation (PSX, PS1), SEGA Genesis / Mega Drive
An adaptation of the classic board game for the PlayStation. The game has modes of two players or one against ten opponents of various skills from the first level (they play from time to time) to the ninth (they live in chess). The game has educational videos (Rule Section) that will tell you the history of the formation of chess and the rules of the game, including a description of the pieces, their capabilities, what is check and checkmate, what is castling, and so on. The developers added a lot of settings to the game, including changing the background of the board, automatic reversal after a move, and other useful little things.
‹
›
Home
View web version