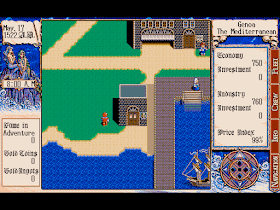 Genre: Simulation, Strategy
Perspective: Diagonal-down
Vehicular: Naval / watercraft
Published by: KOEI Corporation
Developed by: KOEI Co.
Released: 1995
Platforms: DOS, SEGA Genesis / Mega Drive
The genre of the game is not easy to define, there are RPGs, strategy, and trading, but those who played Pirates!, which was sensational at the time, will understand what it is about.
The game tells about a period roughly corresponding to the 15th-17th centuries, that is, about the time of the discovery of America and the establishment of trade relations between Europe and Asia, which is also remembered for the most active struggle between maritime powers for the right to be called the strongest.
Three more parts were released on consoles. The second part is probably the most famous of them, although it won cult status only in Asian countries. Meanwhile, the game is very, very interesting!
Everything is interesting in it, starting with the graphics. Despite the fact that when the PC version of the game was released, it was already 1995, the graphics in the game use the EGA (640x480x16) adapter - in general, as I understand it, this is a proprietary feature of KOEI PC games. And, I must say, the graphics are just great, despite the technical limitations!
A rather unusual and very good feature of New Horizons is that you can choose the main character, and absolutely everything will change from this, that is, in fact, we have 6 different games in one. I think a huge amount of time and effort was spent on this, but it more than paid off: I want to return to the game years later (by the way, I never went through it). The intro for the game briefly talks about the heroes and gives their portraits in full screen. In total, as I already mentioned, there are 6 pieces, namely:
Accordingly, after choosing one of these heroes, you are also offered a direction of activity - to fight, trade, look for treasures, etc., all this is very exciting, but personally, I was most interested in just traveling and collecting treasures. Also, of course, you can follow the storyline, but this is not at all necessary, and you can return to it at any time. All stories are interconnected, and playing as one hero, you will always meet others.
There are a lot of dialogues in the game and they are written interestingly and carefully. Unfortunately, the player's participation in these dialogs consists only in pressing the Enter key.
At first, New Horizons may not be too impressive, especially now that there are more technically advanced games of this theme, but for me personally none compares to it in terms of the transmitted romance of travel, and I am sure that, once started playing, any adventure lover it will drag on and not calm down until it explores the whole world up and down!
‹
›
Home
View web version