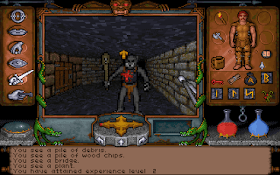 Genre: Role-playing (RPG)
Perspective: 1st-person
Gameplay: Action RPG
Interface: Direct control
Setting: Fantasy
Published by: ORIGIN Systems
Developed by: Blue Sky Productions
Released: 1992
Platform: DOS
The first RPG to use a first-person view and allow free movement. It was in this game that various innovative technological solutions were first applied, including the ability to look up and down.
The player takes on the role of an Avatar, who has already become a traditional protagonist in many Ultima games. He witnesses the kidnapping of the daughter of Baron Almric. And, being accused of committing this crime, he will be thrown into the Great Stygian Abyss with a choice: to find a girl or disappear into a dungeon. During his journey, the Avatar must make contact with many of the surviving residents of the dungeon, as a result of which it turns out that this kidnapping is not as simple as it seems at first glance.
The game takes place in the fantasy world of Ultima Britain. The goal of the game is to pass a multi-level tower, which is an underground complex of caves with the remains of a destroyed utopian colony. Moreover, the passage is non-linear: you can complete quests, explore locations and solve puzzles in any order. But you still need to complete a few specific tasks to complete the story. To improve the view, you can use light sources. All explored places are displayed on the map, and you can also make various notes on behalf of the character on it.
At the very beginning, you need to select a character and his parameters (gender, skills, class). Among the skills there are such as barter, picking locks, fighting with an ax. For exploring the territory, participating in battles and quests, the player earns experience points, which subsequently increase the level of health and mana of the character. Experience also makes it possible to read mantras at temples, thereby increasing the effectiveness of one or another skill. Lighter mantras are written in the game manual, while more difficult ones need to be found during the game. Also, the hero has an inventory that can only be replenished up to a set weight limit.
When developing the game, the authors sought to create not a straightforward game, but an interactive travel simulator inside the tower. Some items in the game have no real use, such as a torch that can be used on corn to end up with popcorn. The game has a physical system, due to which, for example, rebounds of objects from the surface are provided.
‹
›
Home
View web version