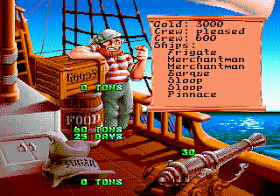 Genre: Action, Strategy / Tactics
Perspective: Top-down
Pacing: Real-Time
Gameplay: Vehicular Combat Simulator
Vehicular: Naval / Watercraft
Published by: MicroProse Software
Developed by: MPS Labs
Released: 1993
Platforms: SEGA Genesis / Mega Drive, DOS
The famous game of Sid Meir (The very one who made Civilization)! You - a pirate, do whatever you want - at your disposal one ship and several people. With this, you rise to the celebrity in the pirate world. Or you'll go to prison, where you'll wither and die ... Then how will it turn out. You are free to become an English, Spanish, French, Dutch privateer or a pirate who works only for yourself! Storm fortresses, catch famous pirate hunters, search for treasures! The world lives with you: new gold mines open, the Indians constantly attack settlements in a new light, and in the old world the great powers constantly tighten the union, then declare war on each other. You in this world are a small part. But, if you want and skill, you can become a very strong part. Dare!

There are five possibilities. Start a new career - the main and most interesting kind of game. Continue a saved game - load the saved game. Command a famous expedition - to command the famous expedition, at the beginning of the game there are already ships, money, people (as if to continue the game started by someone). Fight a duel - fight in a duel, you can with a computer, and you can and with a second player. It is useful before playing for the first time to practice a little. View the hall of fame - look at the fame hall, who scored the most points. Here we will consider the game mode Start a new career. You are given the choice of an era, nationality, surname, level of complexity, and special ability, what will be better for you.

Buildings in the city

On the right of the carpenters you can sell, fix the ships (if you swam into town on the ship), or sell guns. In a shop you can buy or sell Hides, Food, Goods. (The goods depend on the era in which you are) (The richer the city, the more there goods and money, in a poor city it can all turn out that there is no money, no money goods). In the tavern you can recruit a pirate team, the more you are known, the more a person will want to join you. Also there a pirate (not always) for 500 gold coins you can buy a treasure map. Also, not always there is a traveler who can sell information about a city. You can sometimes show the latest news. The next building is the Governor's mansion, where you can surrender the pirates taken captive during your journey, buy a Letter of marque, which allows you to rob ships of the country with which the country in which you are at war is at war. If you successfully fulfill your duties, they will give you a new title and also a few acres of land, and can offer a personal errand, upon successful execution of which you will receive a reward. Also, with a successful game, you can name the name and location of the person who knows the place where your relative is. And the governor can introduce you to his daughter, with whom you can politely talk, or you can offer to marry. If you have a high rank, then after a conversation the governor's daughter will agree to become your counselor, i.e. the next time she visits the governor she will call you the location of the Treasure fleet and the Silver train at the moment. If you want to get married, then if the daughter still doubts whom to marry, then you will need to fight in a duel. And the last building in the city is a bank, here you can divide honestly earned (or looted) you money between members of your team. (Either when your business is bad or when you are already earning a lot of money, you will have to do it.) They will not then work for you just like that.) Then you will be offered to go to sea again, to leave piracy, or to increase the level of complexity (if you think that you play very easily). When you leave piracy, then this game ends. Your merits will be counted, and you will receive your rank, also if you want you can put yourself in the hall of glory, where your name, rank and points will be recorded.

Attack of the ship

During your journey, other ships will come to you on the way. For the first time you will be told what waters you are in. You can approach, or you can swim away. If you approach, you will be told the appearance of the ship. If you get close again, you will be shown the flag of the ship, and its type: civilian, pirate, or hunter. Also you can give a description of their activities. Attention: if the ship is hostile towards you, then after the second approach you will not be able to swim away. After the second approach, you can engage in a fight, ask about the latest news (only for friendly ships), or swim away (also only for friendly ships). If you decide to fight, you will be told how many guns and people are ready for battle and will be given a choice ship, if its form is in brackets, it means that it needs repair. There are several types of ships in the game, each ship has its own ships in each epoch. There are more fast (pinnace, barque, sloop) but less capacious and durable. There are slower, but more capacious and durable (galleon, war galleon, fast galleon). During the battle with button B you can raise and lower the sails (to increase and decrease the speed). Button A shot. Damage depends on the number of guns, the speed of reloading from the mood of people. You can sink a ship, or you can rob it. To do this, you need to take someone else's ship "to ram". If an enemy ship has a cowardly captain, or few people, he will immediately surrender. If their captain does not give up, then you will have to fight him. (See point 4) If the distance between your ships is greater than the screen, the fight will be stopped. After the fight you will be shown how much space is available on your ships, and how much free space on the enemy ship, they will offer either to take another's ship to themselves, or to rob and sink it. If the ship was ruled by an important person (ie a hunter or a pirate), then you will be asked to ask him about the Silver train, treasure fleet, or his son-in-law captive for ransom. True, if you hold it for a very long time, it will jump into the water when you are in the city. Then you can dispose of other people's property, take something for yourself, sink something. If you are looking for a person, sometimes members of his team can tell you his whereabouts. And also sometimes some of the survivors of an enemy ship can ask for you on a ship. Remember that when you take someone else's ship, then people are needed to manage it. Ie there will be fewer people ready to fight. You will have to recruit people for the team.

The city and the attack on it

City. When you swim to the city, you have four options. The first is to swim in the city. It is better not to choose, if there is a hostile attitude toward you, because they will start shooting at you, and nothing good will end there. The second is to attack the city. The third is to try to slip into the city. Useful when you want to enter the enemy city. If you fail, you will have to fight with the guard.
Attack. It looks like an attack on a ship. Only attack you will have enemy forts (if they are). If you attack on a ship, the first stage is analogous to an attack on a ship, except that the fort does not move. If you attack on foot, then you will have to go to the enemy fort by your pirates. With the A button, you can change your group, while holding down the B button, when one of your groups reaches the fort, a fight will begin. After winning you take money from the townspeople. Remember that while you are busy with the attack, they do not slumber, but hide their wealth. The more time you spend on capturing a city, the less money you will get. If your victory was a complete rout of the city, then its governor will run away, and you will be able to appoint a new one, more precisely to choose the country to which he will belong. Attention: when you swim to the city, you are shown whether it has a Silver train or Treasure fleet. This is a good chance to profit. For example, this figure shows that in this city there are both Treasure fleet and Silver train.

First choose weapons. Rapier is the fastest, but does the least damage. Longsword is a medium-speed weapon that inflicts medium damage. The class is the slowest, but the most powerful. There are two kinds of fights. The first one is the command one. During the fight, members of your team will fight along with you. If one person remains in someone's team, then the captain of that team loses the first time he hits it. The second one is one-on-one. Here, the fight is fought until the defeat of one of the players, regardless of other people. Such fights happen when searching for their relatives with those who know their whereabouts.

There are three types of cards. The first is a treasure map, which you can buy in a tavern. The chest usually contains the amount of money in the area of ​​10,000 gold coins. The second is a map with the whereabouts of the lost relative. It can be obtained by defeating one-on-one in a battle with a person whose location you can be told if the governor has successfully completed his mission for a given country. If you do not find a relative to defeat another such person, then you will open most of the card. The third kind is the Inca treasure map. You will receive them when you save a relative. There are 100,000 gold coins. If you save another relative, you will receive one more fragment of the map. Dig on button A.

Button C enter the menu. There you will see a set of options in the form of a room on the ship. The first option is Crew status. There you can see the amount of money you have, the mood of your team (it is also displayed in the lower left corner in the form of a pirate's face while you're swimming), the number of people in the team, the available ships, (in different epochs it is different), see how many days you have enough food, the number of guns. The second item is Treasure maps.There you can see the maps that you have. The third item is Ships log. Here are the latest news that happened to you. Next comes Map of the Caribbean is a map of the terrain where the action of the game takes place. Then Personal status. It shows your personal status, namely: name, age, health, amount of your money, the amount of your land, your reputation, and ranks in all four countries. And the last option is Save game. Here you can save the game, only four slots, you can save only when you are in the city.