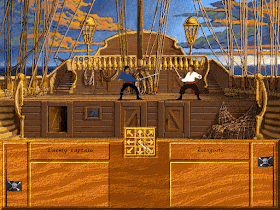 Genre: Action, Strategy
Perspective: Top-down
Pacing: Real-time
Vehicular: Naval / watercraft, Vehicular combat
Setting: Sea pirates / Caribbean
Published by: MicroProse Software
Developed by: MPS Labs
Released: 1993
Platforms: DOS, SEGA Genesis / Mega Drive
We envy the rebellious spirit of the buccaneers and their dangerous lives. Yes, for the most part they were bloodthirsty monsters, life-breakers and parasites, but who among us did not want to become a pirate for at least a couple of hours? Sid Meier was the first in the world to give us such a virtual opportunity by creating "Pirates!" in '87. “Pirates! Gold" is a heavily improved (mostly graphical) remake of the '87 game.
Choosing one of six time periods (1560-1680; the number and ownership of ports on the map, sea traffic and the balance of power in the archipelago depend on this), you are told how dreams of the sea and adventure forced you to be hired into the crew of a modest ship, on which riot breaks out. After defeating the captain, you get his transitional position (and he, apparently, is a trip on the board). Forward, to the nearest port for a letter of marque, which allows you, with the tacit approval of the power that issued it, to sink the ships of its enemies and disrupt the trade of competitors in the Caribbean. For differences, each of the four countries can grant you land and ranks / titles that amuse vanity and give various benefits.
“Pirates! Gold”, like its predecessor, is very detailed. It contains many mini-games (sea battles, fencing, capture of fortresses, search for treasures using maps collected from various sources). The abundance of different game situations and screens will take your interest for a long time.
Do not believe those who say that there is no goal in the game! Why are you launching “Pirates!”? To be a pirate, right? So be it! The goal of the game is to live a bright pirate life full of adventures, and with your achievements (search for missing relatives, romance with a charming lady, obtaining titles, lands, gold, finding treasures and lost cities of the disappeared Aztec/Inca/Maya/Olmec empires) create a legend about yourself for centuries. But oh, how difficult it is to do everything, because time does not spare anyone ... Gradually your health will deteriorate, it will become more difficult to fight, and the sailors love young, energetic and impudent captains who step on your heels. One day you will have to retire and “retrain as a building manager” or governors (depending on the scoring).
Yes, the remake of “Gold” differs from the original mainly in performance. But how different! The graphics and “art” in the game are excellent (without discounts for the fact that it came out in 93). Everything is clear, beautiful, atmospheric and does not blind with bright colors (as the original does). The music is very good, although some in-game sounds are too shrill and unpleasant. All in all, a great premium idea.
‹
›
Home
View web version