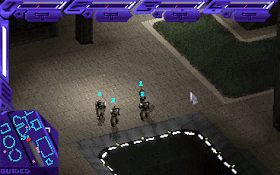 Genre: Action, Strategy
Perspective: Diagonal-down
Pacing: Real-time
Setting: Cyberpunk / dark sci-fi
Published by: Electronic Arts
Developed by: Bullfrog Productions
Released: 1996
Platforms: DOS, PlayStation (PSX, PS1)
At the end of the first part of the game, the EuroCorp syndicate has managed to destroy all of its rivals and actually gain world domination. But nothing lasts forever, and now the seemingly invincible syndicate is getting in the way of a new religious sect calling itself the Church of the New Epoch High Disciple. The battle between a mega-corporation, unaccustomed to any competition, and a tightly organized, but relatively small sect, is sweeping the whole world.
There are very few strategic elements compared to the first part. For example, the use of drugs, so elegantly implemented in the first part, was simplified to the limit in Syndicate Wars, leaving only one strip responsible for the use of sedatives or, conversely, stimulants. You no longer have to worry about ammunition - they are endless for all types of weapons.
The game uses a 3D graphics engine, although all humans are still sprites. A complication is introduced by the camera, which has to be rotated extremely actively so as not to miss potential opponents.
‹
›
Home
View web version