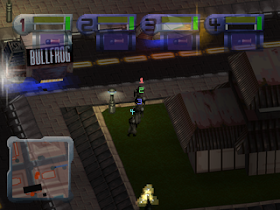 Genre: Action, Strategy / Tactics
Visual: Isometric
Pacing: Real-Time
Setting: Cyberpunk / Dark Sci-Fi
Published by: Electronic Arts
Developed by: Bullfrog Productions
Released: 1997
Platform: PlayStation (PSX, PS1)
The original Syndicate was at one time the very game that Sega and Super Nintendo missed. Practically the perfect combination of an arcade shooter with a deep strategy based on a strong, well-thought-out economic basis. Syndicate was favored by fans of two seemingly incompatible game genres. Long three years passed in anticipation of the continuation, and finally the second part, Syndicate Wars, rotated in the CD-ROM of home computers, and in a few months - on game consoles.
This time at the heart of the game is not the struggle of a mysterious corporation, the Syndicate, for world domination by seizing power in every country - it has already acquired it, but the conflict of the said Syndicate with the so-called Church of the New Epoch. The church is a semi-religious, semi-military organization that pursues such utopian goals as world peace and universal equality and brotherhood. The player can take both the first and the second side, for both developed different scenarios with dissimilar tasks. So, for example, if Syndicate agents are mainly engaged in the destruction and persuasion of a disobedient population, then the Church's novices produce pinpoint strikes, removing unwanted politicians or kidnapping important scientists.
Also, equipment that stands in the arsenal of warring parties is also different. It should be noted that, unlike the computer version, you do not need to go deep into the economic underpinnings of the game, most to develop new weapons - after the due date it simply becomes available for purchase. Many fans of the game considered this move limiting the gameplay, making it less strategic and more "arcade," but Bullfrog also admitted that many screens with numbers and graphics pretty slowed down the perception of the game .You judge whether it's good or bad, I'll just say that newcomers in Syndicate Wars began to settle much summer.
But the graphics has changed, of course, for the better, even compared to the DOS version of Syndicate Wars. To the atmospheric illumination, multiple micro-lights were added, and now even the flashers of a passing police car paint the surrounding landscape. In addition, a small shortcoming of the computer SW has been eliminated: residential buildings and other buildings can not now hide what is happening - if any structure appears between you and your agents, it immediately becomes transparent. Saturated black tones and disturbing quiet music accurately convey a gloomy, oppressive, overwhelmed sense of despair and longing for the atmosphere of the cyberpunk City, the streets of which are always night and always raining. We saw such a city in "Blade Runner", "Ghost in the Shell", in books "Shadowrun", so we see it in Syndicate Wars.

A lot of money

Enter TOTHETOR instead of your name. Get a lot of money and win the game easily.

In the course of "Entry" press UP, UP, DOWN, DOWN, LEFT, RIGHT, X and O (Circle). Hear a shot (if all is correct).
Get access to any weapons, including tanks and helicopters.

When you study chromotaps and clone shields, buy one piece for your agents (they must side by side on your weapon selection indicator -Weapon Select bar). Now start the mission, select your Clone Shields, and then the chromotaps. You now have unlimited energy for your clone shields. Do not forget about chromotaps, and just repeat the whole process again if you changed weapons.