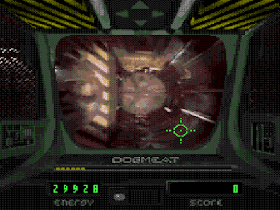 Genre: Action
Perspective: 1st-person
Art: Video backdrop
Gameplay: Rail shooter
Setting: Sci-fi / futuristic
Published by: Sony Imagesoft
Developed by: Digital Pictures
Released: 1992
Platforms: SEGA CD / Mega-CD, 3DO Interactive Multiplayer
Initially, Hasbro wanted to make this game for the NEMO video game system on magnetic VHS cassettes. But this idea was abandoned, and Digital Pictures developed the game for the Sega CD. Porting it later to the Panasonic 3DO in 1994. They also wanted to release it on the SNES-CD.
The game is similar to Loadstar: The Legend of Tully Bodine. The game takes place in the future. In which you take on the role of a rookie who, on his “spaceship”, cleans the sewers of the Solar City from mutated rats, bats and other monsters. An evil Commissioner Stenchler. You also have a co-pilot in your team, who constantly comments on your progress and actions in the game, while the Catfish robot flies forward and tells you the direction. Later, you will also be assisted by a Falco girl from your unit, who will captured by Stenchler, and this is where things get interesting.
‹
›
Home
View web version