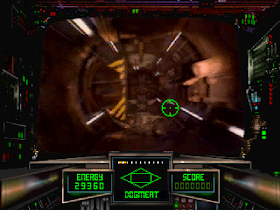 Genre: Action
Perspective: 1st-person
Art: Video backdrop
Gameplay: Rail Shooter
Setting: Sci-Fi / Futuristic
Published by: Hasbro
Developed by: Digital Pictures
Released: 1994
Platforms: 3DO Interactive Multiplayer, SEGA CD / Mega-CD
Sewer Shark action of this game unfolds in the post-apocalyptic world. By coincidence, the sewer network under the "Solar City" plays a very important role. But here's the trouble, various monsters in the form of rats, bats, etc. they overcame it. You act as one of the members of the brigade, whose task is to keep the "sanitation" clean. The Catfish robot will prompt us, and point the way. But the game would not be so interesting if our job was just to clean the sewer, everything is much more complicated is an evil conspiracy and villain commissioner Stenchler. Later the girl Falco from your unit will be kidnapped, and you will have to save her as you find the way to the surface.

Make sure sound to hear the callsigns. (In addition, music after a while starts to get on your nerves.)
If the way your game is being watched by your friend, instruct him (or her) to listen to the changes of the tunnel top of the screen, you can concentrate on destroying the enemies. It is important.
Always use short turns of pallet fire to save energy. Sometimes, between your shot and the "death" of this or that creature there will be a small time delay. Therefore, you should not go on firing thoughtlessly. It is possible that you are already shooting at the corpse, while losing precious energy.
When you turn around turning, always turn the sight in the same direction to shoot at enemies that can appear immediately. For example, if you turn to the right, then move the sight to the right side of the screen. At the turns you need to shoot very quickly to kill the enemy.
Do not waste time and energy shooting at the bats. They are harmless and few points are awarded for them.
If you miss at least one refuel, then you are guaranteed the energy will end before you get to the end. So do not rush past! You need as much energy as possible to survive the attack of Zerks at the end of the game.
During the game, Ghost refers to you with four different callsigns. Each callsign, in essence, means the arrival of a new level with new even more dangerous monsters, which need to be killed. If you received a new callsign and lost your life, then continue the game from the place where you got it.
DogMeat (1st callsign): You only meet with ratigators and bats. Nothing that you could not handle.
RatBreath (2nd callsign): Now it's getting trickier. In the tunnels, scorpio begins to appear, and in order to kill it, you will need to get into it twice. At this level, you already have to fight two creatures at once. If you encounter a scorpion and ratigator, first destroy the scorpion, as this will bring you more points.
EeTerminator (3th callsign): Catfish no longer warns of changes in the Tunnel. Now you follow the pipes for some mad mental. There are more creatures here than at the previous levels, so you will have to shoot much more often to stay alive. modls will start appearing after refuel. The levels of water begin to rise: look behind the indicator and shoot the light bullets when necessary.
BeachBum (4th callsign): refuel will be shortly after you received this callsign. Do not miss it! You have to deal with a lot of enemies and constantly shoot. As the last measure of protection, Stanchler will release into the pipes of the Zerks. Everyone who gets into you, the mirror, takes away 1000 units of your energy, therefore, in order to survive, you need to destroy them mercilessly: the more, the better. They attack only on straight sections of the tunnel, and each time they appear in the center of the screen, so concentrate there all their firepower. Attacks of the zerk last about 45 seconds last this time - and you will receive a reward in the form of a splendid ending, where Falco kisses Ghost (unless you had a feeling that they like each other?), And the secretary Stenchler kisses the Catfish.
‹
›
Home
View web version