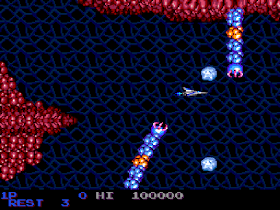 Genre: Action
Perspective: Side view
Visual: 2D scrolling
Gameplay: Arcade, Shooter
Setting: Sci-fi / futuristic
Published by: Konami Industry Co.
Developed by: Konami Industry Co.
Released: 1991
Platforms: TurboGrafx / PC Engine, Nintendo (NES)
The game comes from arcade machines. And what a famous one! But arcade machines are not an area where Konami boasts a large number of good games, everything is exactly the opposite there. And the arcade Salamander (1986) is no exception. Not only is the game unbalanced, it also slows down at many points. Then there was a wonderful version on the NES (1987), which differed greatly from the original, and in 1991 (quite late, please note), the developers decided to make a port on the PC Engine. And for good reason - it fixed all the errors of the arcade version. Again, this version is very different from the NES version, they are practically two different games.
As for the gameplay, there is no classic Gradius powerup bar, we just take a specific powerup and get a specific upgrade. The upgrades are: speed, options, shield (with a normal hitbox as opposed to arcade), side missiles, a powerful forward laser, and less powerful forward waves. There are two types of scrolling in the game: half of the levels are purely horizontal scrolling, the other half are purely vertical. In many moments, the game has been optimized, and now it does not lag almost anywhere.
After death, it resets to a checkpoint (not so in the original) and takes away powerups, but recovery from checkpoints is almost always adequate.
Unfortunately, you will have to die, because there is a system for monitoring the player’s progress, which is classic for arcades - the better you play, the more difficult the game becomes. Level design and bosses are still more interesting in the NES version, but even here there are unique levels.
Recommended to all fans of Gradius - this is one of the best games in the series.
‹
›
Home
View web version