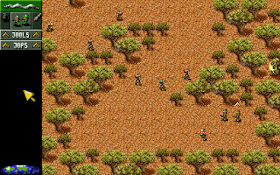 Genre: Action, Strategy
Perspective: Top-down
Visual: 2D scrolling, Isometric
Gameplay: Shooter
Setting: Sci-fi / futuristic
Published by: Virgin Interactive Entertainment
Developed by: Sensible Software
Released: 1994
Platform: DOS
Cannon Fodder 2 is the continuation of the legendary strategy game. In Cannon Fodder 2, you still manage a team of professional warriors who are ready to do anything to achieve their goal. New locations are introduced in Cannon Fodder 2, now the game will take place not only from a series of planned battles, but also from time travel. The latter, in fact, is the conspiracy that you have to uncover. To do this, you will need to go through a series of missions and destroy all enemies. Cannon Fodder 2 added locations with lakes, villages, forests, fields. I was very pleased with the increase in military equipment. Now, when passing the game, jeeps, tanks, helicopters will be on the map, which can be used to defeat the enemy. Also in the game Cannon Fodder 2, the weapons of each soldier were added. In addition to the old machine gun, grenades and rockets appeared. I want to draw your attention to the fact that these supplies should not be used to destroy a foot enemy, since the destruction of enemy equipment and huts is carried out only by these types of weapons. Those. having lost these supplies, the successful completion of the task is not possible. Cannon Fodder 2 is a very interesting arcade strategy that will appeal to the most sophisticated connoisseurs of gaming military conflicts and tactical battles.
‹
›
Home
View web version