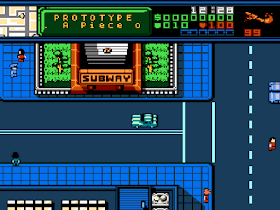 Genre: Action, Racing / Driving
Perspective: Top-down
Gameplay: Fighting, Shooter
Published by: Brian Provinciano
Developed by: Brian Provinciano
Released: 2012
Platforms: Nintendo (NES), DOS
It all started back in 2002 more than ten years ago. When the brilliant game programmer Brian Provinciano decided to make his Homebrew project for the NES. To do this, he developed his personal “Nintendo Entertainment System Game Development Kit”, a kind of SDK development environment for the NES (looking ahead, I will say that in 2011 at the Game Developers Conference he demonstrated how he managed, using advanced software, to overcome HEC iron restrictions). He decided to make a port of the game (transfer the game) Grand Theft Auto III to 8-bit. The game was called Grand Theftendo and was supposed to be released in 2005, but there were some disagreements with Rockstar North. Simply, they were against it, if it would have been possible to agree on licensing the project with Nintendo, then Rockstar were categorically against it. Perhaps they were jealous that a game that was developed by a lot of developers and received good money for it was ported by one person, and even to a console with obviously limited capabilities. The author of the project himself can tell us more about this.
The game was decided to be renamed Retro Theftendo. Around the same time, there were rumors that the author was planning to make his own game for the PC. After that, rumors spread that it was a fake, etc.
But as the years passed, more and more new consoles appeared on the market and the Xbox 360, PlayStation 3, Nintendo Wii became more and more widespread, and then a lot of PSP, Nintendo DS portables appeared, followed by Nintendo 3DS, PS Vita, Nintendo Wii U As well as many portable consoles running the Android operating system. Now the new consoles PlayStation 4, Xbox 360 and others are on the way. This gave game developers more choice, and gave author Brian Provinziano the opportunity to showcase his creation to the masses. To create his Retro City Rampage game for the personal computer, he used his own work, written from scratch in C ++ and DirectX 9. Creating versions of games for next-generation consoles was a little difficult, since each console uses its own API. Reading all this, many probably thought, well, what does Retro City Rampage for PC and Wii have to do with it. After all, we need Grand Theft Auto 3 for NES. But it turns out that quite recently on February 27-28, the author made a new bonus level “ROM City Rampage” (Prototype ROM), the very prototype of the NES version of the Grand Theftendo game, and added them to the game.
While they are available in versions for Nintendo Wii and PC. It turns out that this level in the game is a real ROM file, and is launched in the game, through a kind of emulator. Which is a real gift for all retrogamers, old school gamers and, of course, fans of eight bits.
Anyone who has never programmed for devices with limited capabilities in their life will probably not understand what the author of the game had to face when transferring it from a more powerful system to a very weak one by today's standards. As is clear, the game is completely written in a low-level programming language - assembler for the 6502 processor. The game is fully present in the island of Portland, and this is not even a small level. The work done is amazing, there were no such games on Nintendo yet, you can walk around the city completely on foot or by car in free mode, shoot, kill innocent citizens and police officers, steal cars and much more. Your arsenal of weapons is not small. Here, though, the missions in the game are linear and go one after another. The city consists of 7168x4672 pixels with the size of people being 8x12 pixels.
‹
›
Home
View web version