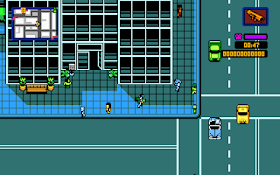 Genre: Action, Racing / Driving
Perspective: Top-down
Gameplay: Fighting, Shooter
Published by: Vblank Entertainment Inc.
Developed by: Vblank Entertainment Inc.
Released: 2015
Platforms: DOS, Nintendo (NES)
The game is inspired by Rockstar Games' Grand Theft Auto games, in which the player can complete various missions within a huge city that is open to explore. During development, about 50 story missions and 30 challenge levels were planned. Common gameplay elements specific to GTA include a wide range of weapons, different shops, the ability to steal cars, and draw the attention of the police with violence and destruction.
As a tribute to numerous 8-bit video games, Retro City Rampage includes design elements from a wide variety of genres and features 16 graphic filters that mimic various retro computers and video game consoles. While primarily played from a bird's-eye top-down perspective, it can switch to a strictly two-dimensional, 2D platformer-style perspective in certain sections.
The game also includes a "Free Roaming Mode", which allows players to freely explore the city and create as much chaos as possible. This mode can also be played with unlockable characters from other games developed by independent developers such as Super Meat Boy , Commander Video from the Bit.Trip series and Steve from Minecraft and others.

In the city of Theftropolis in 1985, "The Player", a bandit for hire, is hired as a henchman by a major crime syndicate led by Jester. Three years later, during a failed bank robbery, the Player comes across a time-traveling phone box, which he then steals from its owners. The cubicle transports him indefinitely to the year 20XX. Upon arrival, the booth breaks down and a man named Doc Choc (a parody of Dr. Emmett Brown from the Back to the Future films) arrives in his own time-traveling vehicle and rescues the Player, mistakenly believing he is a time-traveling hero.
The player must work with Doc Choc to collect rare parts needed to repair the time booth while encountering numerous references and parodies of 1980s video games and pop culture, including law enforcement, The Jester, Bayside High School students, and Dr. Von Buttnik (a parody of Sonic the Hedgehog's nemesis Dr. Robotnik), Doc Choc's rival and head of research and development at A.T. Corp, a technology corporation that wants to use a time machine to control the electronics market.
‹
›
Home
View web version