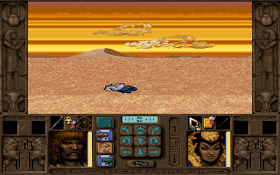 Genre: Role-playing (RPG)
Perspective: 1st-person
Pacing: Real-time
Setting: Fantasy
Narrative: Horror
Published by: Strategic Simulations
Developed by: DreamForge Intertainment
Released: 1995
Platform: DOS
Once upon a time there lived in a certain world, and specifically - in the land of Har'Akir, a pharaoh with a pretentious name Ankhtepot. And the pharaoh had a dream - immortality, for the sake of achieving which he did all sorts of obscene things - like experiments on countless slaves. And as his last years came, the pharaoh, due to the lack of any significant results in this field, completely despaired and began to smash the temples of his own gods, who were deaf to his pleas. And what would you think? Helped! And the solar god Ra himself answered Ankhtepot, and said something in the spirit of "okay, that's it, calm down, man. You will have immortality, I give you my word of honor. And you will answer for disrespect."
And he answered. Ra's curse was that anyone Ankhtepot touched outside of sunlight would die and become undead. "Well, okay," the hero of the occasion decided and, taking the opportunity, spawned a whole army of undead from his own subjects. At this point, the priests of Ra could not stand it, who, obviously, expected that the pharaoh would nevertheless realize his mistakes and back down. Seeing that it turned out even worse, they rose up and killed yesterday's lord. More precisely, "formally" killed. For, characteristically, Ra did not lie about immortality. The problem turned out to be different - as in the case of literal genies, no one promised eternal life, eternal youth, and even more immunity from piercing and cutting injuries to the unfortunate pharaoh, only the absence of death as such. And our hero of the occasion became not dead, but not alive; and got into the demiplane of horror along with all his pharaoh's "shop" - a piece of Har'Akir, where the burial complex was located with the now mummy of the "technically immortal" pharaoh.
It was this short but instructive tale that became the basis for the new adventures of the heroes who had just defeated the local not at all Dracula in the local Ravenloft at all not Transylvania. And such a connection is not at all for a red word: the game allows you to port characters from Ravenloft: Strahd's Possession, released a year, transferring those "from fire to fire". To be more precise, strictly speaking, quite the opposite: from the cold foggy Barovia to the hot desert Har'Akir, where the theme of fire takes pride of place and stretches like a red line through the narrative. Which is expressed both in the presence of "hot" opponents and spells, and in the characteristic boundaries of the domain in the form of a fiery wall. The very same emphasis, as it is easy to see, has shifted from gothic horror to banal survival in the scenery of a fantasy almost-Egypt.
Otherwise, the game remained the same good old AD&D craft on the Menzoberranzan engine as the previous part, with all the advantages and disadvantages of such projects. And there are not so many differences from its predecessor. To leave the ill-fated domain, to do good to the locals as much as possible, to deal with GlavGad for this - we have already seen this somewhere, haven't we? Moreover, the game world itself (more precisely, its concept) also ... does not shine with variety. This is a huge desert, surrounded by mountains from the north, on the other hand - by the notorious fiery wall (on the border of the domain); not far from the start there is a village full of frightened residents ... um ... in general, the project itself leaves strange feelings. You can't call it secondary; original too.
Now about the merits - a characteristic feature of the games of those times (published mainly by SSI, such as Thunderscape: World of Aden) is the presence of monsters, undead and other very unconventional characters in the party, different from the standard human-elves-gnomes. The "Stone Prophet" did not let us down in this regard either.
Otherwise, there are exactly two things to say about this game:
With the first thesis, everything is simple: whoever likes the first part of the computer "screen adaptation" of Ravenloft, he will probably enjoy the second one. If you don't like the first one, you probably won't like the second either. But with the cover, everything is much more interesting: this game does not make a revolution in the genre, it rather "founds" this very genre (given the theme of "ancient Egyptian horrors" that was not very richly represented in the state of 1995 in the computer games genre). Which is very well superimposed on the habit of inserting recognizable historical prototypes into the game world, characteristic of the early D&D tradition (like Mulhorand in the great and terrible Forgotten Realms). So there is enough disclosure of the "seemingly Egyptian" theme in the game - there are oases, and the horrors of the desert, and damned tombs with vile mummies...
As for the software implementation itself - although there are still differences between the "prophet" and its "obsessed" predecessor (for example, changes in the interface), they are not so great as to somehow catch the eye. The game still pleases with "atmospheric" sounds and voice acting of dialogues, colorful textures and panels of inventory or character statistics carefully drawn in the style itself.
‹
›
Home
View web version