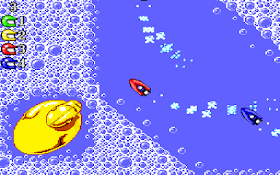 Genre: Racing / Driving
Perspective: Top-down
Published by: Codemasters Software Company Limited
Developed by: Codemasters Software Company Limited
Released: 1994
Platforms: DOS, SEGA Genesis / Mega Drive, SEGA Master System (MS), Nintendo (NES), Nintendo 64 (N64)
Excitement is a passion that subjugates mainly adults. Horse racing, chariot competitions, and with the invention of automobiles, racers of all stripes and qualifications moved to roaring and metal-sheathed "cheetahs". Championship systems appeared, drivers began to fight with time and with each other, with dirt on the roads, with snow storms and speed itself. Spectators root for their favorite athletes, worry and place bets. The great spirit of fighting with one's own achievements has not looked into big sport for a long time, each victory is paid for by agreement, each defeat is mourned for the lost funds. When the primitive sport turned into modern journalism and a way to earn a living, the young world of computer games embodied not only the extraordinary, but also the most incredible fantasies of society.
In parallel with serious "male" cars and complex tracks, arcade projects began to appear on the gaming scene, seeking to attract the player not with cutting-edge realism of the action, but with simple gameplay, which at the same time contains the necessary minimum of uniqueness. Micromachines are one of those "fun". It does not require mental or physical effort from the player, but in some incomprehensible way draws warm colors, ease and good mood into its world. A racing arcade where there are no stopwatch restrictions and invisible barriers on the track. On the one hand, realism in the game tends to zero, but regarding the ability to drive microscopic cars along the edge of a pool table or on the floor between scattered nails and screws, the realism of behavior, like the interactivity of the environment in Micro Machines, is fantastic for 1994.
Cool Spider, fat good-natured Walter, cross-eyed Mike, girlfriends Annie and Joel, cunning Vietnamese Chen, silly Dane, beautiful Cherry and along with them a couple of contenders for three places in microcar races. All of them are children and teenagers who have come together to resolve the dispute in a fair fight 1x1 or 1x1x1x1. The second option involves leaving all three opponents behind, but each of them strives to break into the lead. The 1v1 fight is more loyal to the player - it is not even necessary to overtake the opponent for all three laps - it is enough to break away from opponents at a decent distance several times in a row and prevent them from doing the same. But these guys never lose heart, even if they drop out of the game, and other participants take their place. The leader gets fame, applause and a new microcar model. The winner puts the acquired trophies in a chest, subsequently selecting the right car for a particular track. Large tractor wheels are suitable for off-road, frisky buggies are good for sand, it is better to drive Formula 1 microbolides in the garden along paved paths, and take a car to school for desks, rulers and textbooks. In exceptional cases, even tiny helicopters and the same boats can take part in the competition.
The Micro Machines game is probably the best cure for everything - boredom, fatigue, depression and other mental wailing go away by themselves.
‹
›
Home
View web version