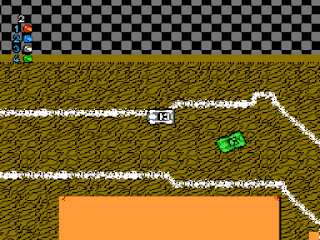 Genre: Racing / driving
Perspective: Top-down
Published by: Camerica Limited Inc.
Developed by: Codemasters Software Company Limited
Released: 1991
Platforms: Nintendo (NES), SEGA Master System, SEGA Genesis / Mega Drive, Nintendo 64 (N64), DOS, Super Nintendo (SNES)
Micro Machines was based on a popular line of miniature cars, the size of a toy car, spinning circles on full-size paths through gardens, breakfast tables and billiards. Unlike most of the racing games featured on the NES, Micro Machines features a fairly wide variety of vehicle types, unique tracks and a rare sense of real speed, creating a miniature atmosphere of mischief.
Micro Machines has modes for one or two players. The single player mode includes participation against four computer controlled players (the player continues the game until he finishes with 1st or 2nd place in each race). Finishing 3rd or 4th leads to the loss of life and the need to repeat the current race until the victorious final. Six types of vehicles and tracks with bonus items, in a skillful case, will provide the player with the lost lives.
The levels do vary in the direction of unpredictability, so in one race the player can rush in jeeps over a breakfast table littered with cereals, waffles and oranges, and in another, cars will ride on miniature boats in the bathroom. This standout approach set the game apart from the less memorable NES races, which rarely offered a variety of vehicles or visually distinctive tracks.
But like most races, Micro Machines has the disadvantage of not being able to see what's going on in front of the screen. Combined with high-speed cars, the player is forced to memorize the architecture of later levels in order to be able to come first to the finish line. From time to time, it becomes obvious, it becomes obvious that some of the cars of computer rivals are much faster (despite their external similarity), but this is not a reason for defeat, since even high-speed cars can make bad turns, although it can have a discouraging effect on the player, when he will observe the break of his position with the computer, which took the first place.