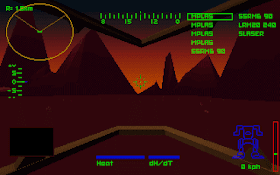 Genre: Action, Simulation
Perspective: 1st-person, Behind view
Interface: Direct control
Vehicular: Mecha / giant robot, Vehicular combat
Setting: Sci-fi / futuristic
Narrative: War
Published by: Activision
Developed by: Activision
Released: 1995
Platforms: DOS, PlayStation (PSX, PS1)
In my opinion, this is the best fur simulator ever made. In this game, you, as a pilot of one of the clans (the clans of the Wolf and the Jade Falcon are presented to choose from), must take part in battles on giant robots and, as you complete missions, gain more and more fame for yourself and eventually even become the Khan of the clan, if you have enough for this skill.
‹
›
Home
View web version