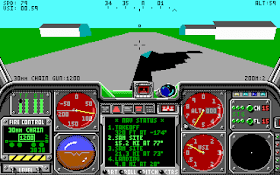 Genre: Action, Simulation
Perspective: 1st-person, 3rd-person
Vehicular: Helicopter, Vehicular combat
Published by: Electronic Arts
Developed by: Electronic Arts
Released: 1990
Platform: DOS
The legendary simulator of the legendary LHX helicopter (symbol of the top-secret "Comanche" helicopter at that time) offers you 5 levels of difficulty in the fight against international terrorism in Libya and "international communism" in Cambodia and the GDR, and a choice of four helicopters for this holy cause.
As you can see, each helicopter is good for a specific task, so read the briefing carefully before choosing your “air horse” and weapons for it before a particular mission.
You will have both combat missions to search for and destroy ground and air enemies, as well as transport missions, in which you will need to deliver cargo to its destination or evacuate your people. In the second case, the choice of "Apache" and LHX helicopters is not available. However, the enemies will not doze off in any way and will definitely try to make a hole in your car or windshield when they meet you. Be careful, especially when in contact with enemy air defense forces.
Enemy foot soldiers with small arms and anti-aircraft weapons are not displayed on the radar, so press Enter more often if you do not want to be shot down by Ivan (Abdullah, Nguyen) with the Stinger.
Happy flying!
‹
›
Home
View web version