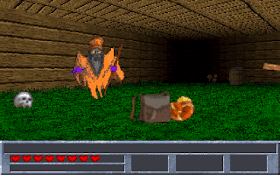 Genre: Action, FPS
Perspective: 1st-person
Gameplay: Shooter
Narrative: Horror
Published by: NewCom
Developed by: Gelios
Released: 1995
Platform: DOS
Evil has woken up in the old Kremlin cellars. Ghosts of boyars, archers and many others loiter in the semi-dark rooms. Many heard strange sounds, but few dared to find out what was the matter, and those who went there never returned. We pick up a blaster (!) And set off to put an end to evil.
The game itself is the purest clone of DOOM. The gameplay is exactly the same - we walk around the level, shoot monsters and look for new weapons, bonuses and an exit button. There are even 3 episodes in this game, just like in the first DOOM. It's just implemented much worse. In this haze, some curious features are drowned. For example, if we eat fly agaric, health will decrease. But this does not save this game, and it is worth playing it just to get acquainted.
But still, DuK is a very interesting game, albeit poorly implemented.
‹
›
Home
View web version