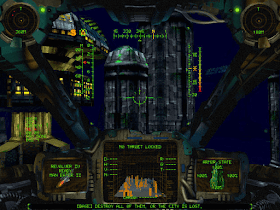 Genre: Action, Simulation
Perspective: 1st-person
Vehicular: Naval / watercraft
Setting: Sci-fi / futuristic
Published by: Blue Byte Software
Developed by: Massive Development GmbH
Released: 1997
Platform: DOS
The future that the creators of Archimedean Dynasty predict for us can hardly be called rosy. After a global nuclear war that melted the ice caps at both poles, the surface of the planet ceased to be habitable, and humanity was forced to descend into the depths of the ocean, from which it emerged millions of years ago. But, as the game's advertising slogan says, humanity ends where depth begins. And even under a forty-meter layer of radioactive ash that covered the surface of the once blue ocean, people continue to be people - greedy, selfish, cruel. Welcome to the world of Aqua, where everyone breathes artificial oxygen, eats artificial food, and where people don't know sunlight. This is clearly not the place where you would like to spend your vacation.
Part simulation, part adventure game, Archimedean Dynasty sucks you into its magical world from the first minutes of the game. Feel like a mercenary who failed his contract for the transportation of valuable cargo and is now in disgrace. Forced to take any job, Deadeye Flint has not lost his two most important qualities - a sense of pride and skills in managing a submarine. Unfortunately, at first you will have to be content with just this, and even a miserable vessel, ironically called a submarine.
The game world is vast and varied. Traveling from city to city, you will communicate with a variety of characters. How you deal with them will determine which missions you can get. Considering that there are more than a hundred NPCs in the game, it is impossible to stay on good terms with everyone, and you will inevitably make enemies for yourself, which sooner or later you will encounter in the endless ocean depths. Fortunately, you will also have friends who are ready to help in difficult times. But in any case, you can’t do without conflicts, so learn to maneuver deftly and shoot accurately.
The submarine is controlled directly from the pilot's cabin. Fortunately, the balance of the physical model is shifted towards dynamism, not realism. We must not forget to buy more and more new types of armor, torpedoes, sonars, guns and engines. Do not worry and save money to buy a more advanced watercraft - you will inevitably get it as the story progresses.
While under water, you should always keep your eyes open. In addition to a variety of submarines hostile to you, the depth is fraught with many other dangers. Do not forget about the existence of various currents, minefields, as well as areas of high radioactivity left after the war. One of the most interesting tricks is the ability, by turning off the engines and using only the current, unnoticed by the enemy's sonars to get close to him. Nothing compares to the feeling.
Is it really all that great? It seems that this time it really is. The disadvantages of the game can only be called excessive linearity in terms of the choice of watercraft, or rather, the lack of this choice. But that's not the kind of flaw that would deprive Archimedean Dynasty of its title as the best futuristic submarine sim ever made.
‹
›
Home
View web version