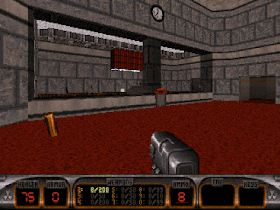 Genre: Action, FPS, DLC / Add-on
Perspective: 1st-person
Gameplay: Shooter
Interface: Direct control
Add-on: NPC / enemy, Other, Story / mission
Setting: North America, Sci-fi / futuristic
Narrative: Adult, Comedy
Published by: WizardWorks Group
Developed by: Simply Silly Software
Released: 1997
Platform: DOS
Duke was already preparing to celebrate Christmas, but suddenly received a telegram: unfinished aliens and feminist elves who joined them kidnapped Santa Claus, brainwashed him and now want to use him in their villainous plans to take over the world. Well, the heroes do not have days off and the working day is not normalized, so the protagonist will have to keep his way to the North Pole.
Duke will be confronted by both familiar aliens and raging elves - small, nimble, but very weak. On the side of the elves, snowmen will also come out - stationary and bullet snowballs, floating in the air and trying to freeze, as well as on tanks similar to those of the pigs from the original game. Santa Bot, armed with a rocket launcher and a machine gun, will act as the boss - he is an unexpectedly strong opponent, and the fight with him is noticeably more difficult compared to the rest of the episode, although he will not cause too much trouble either.
Where will the main character go? The first two cards represent the first two levels of the original; their architecture is only slightly modified (even some of the secrets are in the same places), and you will have to move in the opposite direction. Over the next five, the player will make their way to Santa's lair through the headquarters and the elf village, but there is almost nothing of note there either. All these levels are very short and quite linear, it is hardly possible to get lost on them. There is no secret level at all.
As a plus, you can write down the atmosphere of Catholic Christmas: Duke is surrounded everywhere by elegant Christmas trees; the aliens are decorated with horns, some with a garland, and some have put on a red coat; elves after death often leave gifts for our hero - they may contain armor, a first-aid kit or cartridges. The whole short journey is accompanied by famous Christmas songs.
The addition does not carry anything radically new, but it may well help pass the evening - there is simply nothing to do longer.
‹
›
Home
View web version