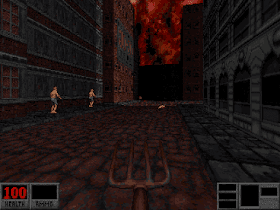 Genre: Action, FPS, DLC / Add-on
Perspective: 1st-person
Pacing: Real-time
Gameplay: Shooter
Interface: Direct control
Setting: Fantasy
Narrative: Horror
Add-on: NPC / enemy, Other, Story / mission
Published by: GT Interactive Software Corp.
Developed by: GT Interactive Software Corp.
Released: 1997
Platform: DOS
The second (after Cryptic Passage) addition to the game Blood, and much more interesting: if the first, in fact, was only new levels to the original game, then this thing is quite drawn to a full-fledged "Expansion Pack".
Again, only a few words can be said about the plot (especially since it is unlikely that anyone is interested): some priests of Tchernobog continue the war with Caleb (or is he with them?), For which they decided to call on the Beast. His fate, however, is predetermined...
Plasma Pak includes eleven levels, a host of new enemies, and improvements to three weapons (including the addition of alternate fire to two of them). The new levels, just like in Cryptic Passage, are very atmospheric and at first glance do not even always fit into the world of Blood (for example, the level with a pirate ship, and the beginning of the game does not seem really gloomy compared to the original ...) , but much more than locations, new creatures delight, especially creatures spitting napalm called Fire Pod (outwardly, in many ways analogous to those seen in the original, but much more dangerous) or Zealot cultists armed with Tesla guns. Of course, there will be secrets (and a whole secret level) too.
There seems to be no cardinal graphic changes, but this is not required for such a game. Only one sentence can serve as a verdict - this is really a full-fledged continuation of the first Blood, if not as a separate story, but as a few more hours of bloody joys.
‹
›
Home
View web version