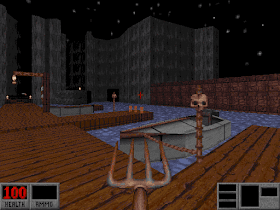 Genre: Action, FPS, DLC / Add-on
Perspective: 1st-person
Pacing: Real-time
Gameplay: Shooter
Interface: Direct control
Add-on: Map / level, Story / mission
Setting: Fantasy
Narrative: Horror
Published by: WizardWorks Group
Developed by: Sunstorm Interactive
Released: 1997
Platform: DOS
Addition to the game Blood. The plot - some evil god (apparently not Chernobog) stole a certain scroll with which he can destroy reality, and you, in the role of Caleb, need to prevent him from doing this.
The add-on consists of ten quite original, atmospheric and not the easiest levels to pass, among which there are such places as the opera house, the cemetery and the old docks. The add-on also differs from the original with improved textures.
‹
›
Home
View web version