A Nightmare on Elm Street (DOS) 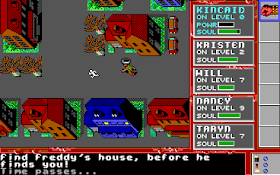 Genre: Action
Perspective: Top-down
Narrative: Horror
Published by: Monarch Development
Developed by: Westwood Associates
Released: 1989
Platforms: DOS, Nintendo (NES)
"The illegitimate son of a hundred maniacs", a former employee of the city boiler house, wears the same hat and striped T-shirt, always smiles and does not cut his nails on his right hand - this is Freddy Krueger, the hero of the cult "film series" called "A Nightmare on Elm Street". He comes into the dreams of depraved teenagers and kills them, and the murder itself takes place in reality, and small children are completely aware of it and even sing quietly a rhyme about the fact that in no case should you sleep, otherwise “Freddie will come and take away "...
But for some reason, all this causes not fear, not horror, as it should, but some strange irony over reality and is perceived at the first viewing as a cocktail of black humor, and at the second - as a very intelligent satire. This is not a horror movie. This is what is called "horror".
Games based on films, as you know, "then" were also made. And if the movie didn’t scare you (and, I hope, it did), then the game should not scare you even more so. This is a cute and authentic "quest arcade" with an "almost from above" view, where you play as one of five teenagers (you can choose at the start of the game), in whose role you will have to put an end to the atrocities of a terrible maniac. The gameplay and especially the appearance are somewhat reminiscent of Gauntlet, although there are much more quest elements: we will have to solve various "puzzles", and communicate with a number of personalities, and use various items found (among which there are weapons), and, of course , to run from Freddie himself so that he does not notice us, while looking for his house ...
The graphics, as already mentioned, are pretty pretty and prevent (does it interfere?) To take the game seriously. Small houses or pieces of furniture (if we are in a building), an even smaller (but disproportionately large compared to the "houses") figure of our character, the stinginess of colors and not too much variety of available actions - everything is true, but this does not in the least prevent us from having fun from this wonderful game. And even if the "hatter" does his dirty deed towards you (which in no case will be shown in any detail), then nothing will prevent you from loading the last saved game.
All in all, a living classic of the genre and of computer games in general, recommended to anyone who loves good old games. Freddy waits for you… 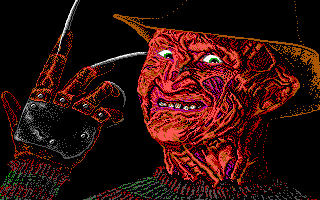