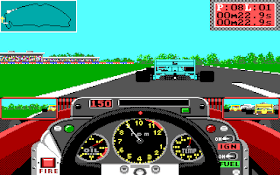 Genre: Racing / Driving, Simulation
Perspective: 1st-person
Vehicular: Automobile, Track racing, Vehicle simulator
Published by: Accolade
Developed by: Distinctive Software
Released: 1988
Platform: DOS
Grand Prix Circuit is a very good Formula 1 racing simulator for its time. Gaming critics, until 1992, considered Grand Prix Circult the best car simulator, although the game was released back in 1988. A huge database of car settings allows you to feel like a real master of your craft. Well-oiled ability to shift gears and a well-coordinated team is the key to winning the race. The manufacturer is very meticulously approached the little things. If you tighten with a gear change, you can easily screw up the engine. The player does not forget about the rear-wheel drive of a racing car - you overdo it with the gas pedal on a slippery track ... it’s gone on foot, the car will spin so that only the guardrails will save. The set of tracks is amazing, it contains the geography of the whole world, the most famous tracks of that time. Moreover, the tracks were as close as possible to their real counterparts. It is worth noting some of the most difficult Formula 1 tracks - Japan and Monaco. Indeed, when playing the Grand Prix Circuit, they face very great difficulties. The presence of a large number of turns, twists and hairpins, as well as a persistent opponent who catches up with you, makes the passage of the Grand Prix Circuit incredibly interesting and exciting. Do not forget about pip-stops for refueling and adjusting personal characteristics.
‹
›
Home
View web version