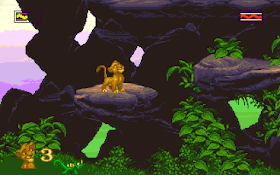 Genre: Action
Perspective: Side view
Visual: 2D scrolling
Gameplay: Platform
Setting: Africa, Fantasy
Published by: Virgin Interactive Entertainment
Developed by: Westwood Studios
Released: 1994
Platforms: DOS, SEGA Genesis / Mega Drive, Super Nintendo (SNES), SEGA Master System, SEGA Game Gear
Accordingly, you have to play for the unintelligent lion cub Simba, who at first only knows how to jump on his opponents, turn porcupines over with a growl (more like a meow), and even somersault, making his way into hard-to-reach places in this way. After the middle of the game, Simba grows up and learns to hit opponents with his paws.
There are ten colorful levels in the game, not counting bonus inserts in which you have to play as Simba's friends - Timon and Pumbaa.
‹
›
Home
View web version