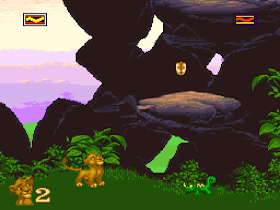 The game consists of 10 levels, including jungles, cliffs and waterfalls; to create an atmosphere in each of them to use music from the cartoon. Additionally, Simba will ride on an ostrich, fight with hyenas and run away from the herd of wildebeests. In the game there are bonus levels where the player will need to play for another character - Pumbaa and Timon - and collect different colored edible bugs.

On many of the features The Lion King game design influenced previously released by the same publisher of the game Disney's Aladdin. Developers were available sources and tools used to create the Disney's Aladdin, however, they were only borrowed some ideas.
All the graphics for this game drew artists who worked on the same cartoon.

The main hero of the game is a Lion, and after the level of Hakuna Matata - adult lion Simba. Simba has a number of inherent gaming skills: he can run and jump on the platform and the corresponding projections. He has the ability to perform somersaults, beating his opponents, that serves as a "weapon". Simba also may growl, throwing the enemy into a state of torpor (for a while they freeze), or the tool is able to kill the monkeys on the seventh level. During the game, Simba will often jump high cliffs and precipices, it has the ability to cling to their edges. A striking feature of the character, and the game is that to whatever height Simba did not fall, it is not broken to pieces. By and large, there are opportunities among Simba jump, run, tumble, growl, punch paw (in adulthood).

Press B, A, R, R, Y (X, Z, C, C, S on keyboard) at the options screen. The screen allows you to choose the level and invulnerability.
‹
›
Home
View web version