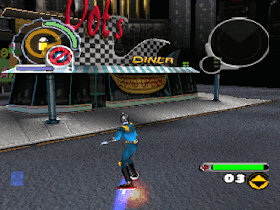 Genre: Action
Perspective: 3rd-person
Gameplay: Shooter
Setting: Sci-fi / futuristic
Published by: Electronic Arts
Developed by: Electronic Arts Canada
Released: 1998
Platform: PlayStation (PSX, PS1)
A game based on the animated cartoon of the same name. The malicious company Megabyte again took up its own, having produced hundreds of Tear in the computer everywhere. Acting as Bob's security guard, you are fighting against the destructive forces of the villainous robot Megabyte. Bob rushes on his Zip board - a flying skateboard, destroying flying tanks, fighting hurricanes, "liquid energy", terrible robots. But Bob's main task is to prevent Megabit from infecting the computer system with a virus! 21 3D levels and seven different sectors in ReBoot! From peaceful countryside to Chaos! Eight Bosses and over 30 different enemies! And also non-linear nature of management, brilliant cinematic inserts, numerous weapons and various means of protection! Only you can restore order in virtual reality by correcting all failures and malfunctions. Actually, a detailed guide to playing ReBoot is not required. Just stick to the direction of the next failure (indicated by an arrow on the radar screen) and fix one malfunction after another. Below are a few tips and tricks that you may find useful in boss fights and when exploring the levels of the game.