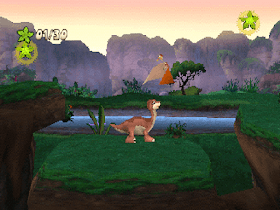 Genre: Action
Gameplay: Platform
Published by: TDK Mediactive
Developed by: Digital Illusions Canada
Released: 2002
Platform: PlayStation (PSX, PS1)
The game is based on the 9th part ("Big Water Adventure") of the famous franchise. The plot of the game repeats the history of the cartoon. Baby Mo - the prehistoric ancestor of the dolphin - is stuck in the Great Valley after a heavy rainstorm and cannot get to the Great Water to his family. Littlefoot, Cera, Ducky, Spike and Spike decide to help the poor fellow.
The game is a 3D platform game consisting of several short levels in which you have to jump over gaps and collect leaves. After every second level, you need to win a small race to go further. In such a race, for reasons understandable to those who watched the cartoon, everyone can participate, except for Petri. Moe himself will also appear as a playable character near the end of the game.
There are no usual "lives" in the game: after falling into the abyss, you start with checkpoints.
‹
›
Home
View web version