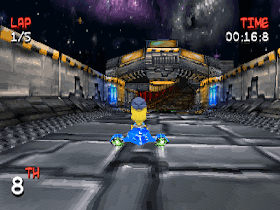 Genre: Action, Racing / Driving
Perspective: Behind view
Setting: Fantasy, Sci-fi / futuristic
Published by: Mud Duck Productions
Developed by: Miracle Designs
Released: 2003
Platform: PlayStation (PSX, PS1)
In Miracle Space Race, you can play as one of eight characters to try and win one of the three space kart championships available. You have several types of weapons including rockets, mines, turbos and shields. The game also has secret characters that are unlocked as you win races. The game has an arcade mode (ride on any track) and a Time Trial mode. In general, Miracle Space Race is very childish and it is difficult for it to compete even with not the most successful games of the genre, and even more so with Crash Team Racing.
‹
›
Home
View web version