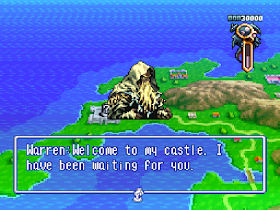 Genre: Role-playing (RPG), Strategy
Perspective: Diagonal-down
Visual: Isometric
Pacing: Real-time, Turn-based
Setting: Fantasy
Published by: Enix America Corporation
Developed by: Quest Corporation
Released: 1995
Platforms: Super Nintendo (SNES), PlayStation (PSX, PS1)
Great game! One of those that, in terms of the depth and variety of its gameplay, will give a considerable head start to many modern developments. Which, in general, is not surprising, considering in the bowels of which company this masterpiece was developed. For a number of obvious reasons, Ogre Battle did not become a "cult" and was well known only in a relatively small circle of connoisseurs of aesthetes, for whom a sequel was released for the same SNES - Tactics Ogre (later re-released on the PlayStation).
So, why is Ogre Battle so good? Let's take it all in order. Unlike Shining Force, Final Fantasy Tactics, and other RPGs/strategies, Ogre Battle is based on the strategic beginning, which decisively prevails over role-playing, which manifests itself here in the general fantasy atmosphere and character development. And both components of the game are sustained in perfectly matched proportions, not to mention the fact that they are executed simply superbly! I'll tell you a little more about the structure of the game.
The main task of the player is to seize power in the kingdom by taking control of several dozen local territories. In each specific area, you will be given a specific mission (usually consisting in defeating the strongest squad in the location - the Boss, so to speak), the implementation of which will allow you to move forward. However, the game also contains many secrets and secondary missions that have a significant impact on the plot, and most importantly, on the ending of the game. And since the enemy never sleeps, and artificial intelligence, although not very smart, is very aggressive (especially closer to the middle), stubborn and sometimes very annoying, so, trying to unravel all the secrets inherent in this game, you can sit for hours at each card. Perhaps the main, albeit a very relative drawback of Ogre Battle can be called a certain impersonality of the characters, but this is fully compensated by their impressive number. Several of your units can operate on the map, consisting of 3-5 fighters under the control of the commander. Over time, warriors gain experience, raise levels, and will also be able to use one of the many artifacts available here. The fights themselves are also very unusual. First of all, you will have to get used to the fact that you will not be able to directly influence the fight, and the player’s participation is limited only by the choice of battle tactics, “advice” to the fighters when choosing a target and using magic, which is presented here in the form of 24 magical Tarot cards, moreover, providing the most direct impact on the strategic part of the game!
The scope of the game is impressive! Both in terms of the scale and depth of the gameplay, and the complexity of the epic storyline. Yes, and some pseudo-orchestral themes in the musical arrangement are worth something!
‹
›
Home
View web version