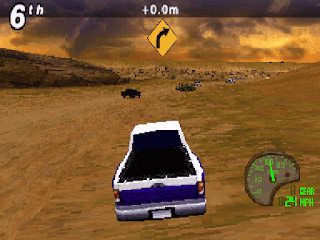 Genre: Racing / driving, Sports
Perspective: Behind view
Interface: Direct control
Vehicular: Off-roading
Published by: American Softworks Corporation
Developed by: Eutechnyx Limited
Released: 1999
Platform: PlayStation (PSX, PS1)
TNN Motosports Hardcore TR is the second game in the Hardcore 4x4 series. True, the continuity here is conditional, it is expressed only in the name of the game and the class of racing competitions. The developer and publisher of the game also changed (the first part for PSX was developed by Gremlin Interactive). Eutechnyx has made very good racing games before, such as Grand Touring Racing '98, Max Power Racing (C3 Racing), 007 Racing (the game was released after Hardcore Heat). By the way, C3 is a complete analogue of the game Hardcore Heat, with the only difference that there was a change in the lineup, and the tracks, engine and interface of the game remained almost unchanged. Small (and unpleasant) moments also touched the gameplay. So, falling into the water from a steep cliff ended the game (in Hardcore Heat you could continue the race without annoying level/track reloads).
In the TNN Motosports Hardcore TR game, you have a large number of cars and tracks at your disposal (each of them has 3 variations, including a mirror image). The tracks are located in various parts of the world - Africa, North and South America, and run both in cities and in mountainous, desert or swampy areas. They are executed very picturesquely, driving is a pleasure. And the game also has an interesting feature: when driving along the track, your car reacts sensitively to any changes in the landscape paired with a view camera, which developers often neglect, in other words, on the screen you observe not only the vibrations of the car itself, but also the camera reacts to wiggles, like you are driving a real car. The Active Camera is a very useful addition to the game, but you can disable it if you wish.
At the beginning of the game, you have access to a couple of cars, 2-3 tracks, 1 out of 4 tournament competitions of various classes, as well as traditional Arcade and time trial modes. As you advance and progress, which are achieved by the total number of tournament points scored, new cars and tracks open up for you. With all this, if you pass the first tournament mode without any problems, then the subsequent ones will be much more difficult.
Before each track, you can set up the car in all respects or leave them by default, after which, if desired, make a test run to familiarize yourself with the track, and only then compete with opponents.
‹
›
Home
View web version