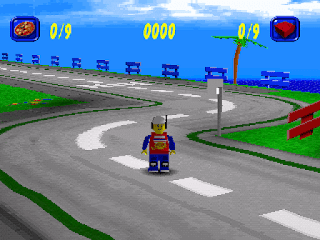 Genre: Action, Racing / driving, Sports
Perspective: Behind view
Gameplay: Mini-games, Tricks / stunts
Sport: Skateboarding
Vehicular: Automobile, Flight / aviation, Helicopter
Published by: LEGO Media International
Developed by: Silicon Dreams Studio Ltd.
Released: 2001
Platform: PlayStation (PSX, PS1)
In the second part of the game, the main character was still the same guy named Pepper (Pepper Roni). He is the only playable character, unlike the previous part. The game has almost complete freedom of action, and indeed, the game is very similar to GTA 3. You can freely move around the Lego island. Drive various cars, fly a helicopter, swim on a jet ski (scooter) and a boat. Pepper himself also knows how to swim, which was not implemented in the third part of GTA. You can enter individual buildings, play various mini-games. Pepper uses pizza as a weapon. He throws it at the enemy. Of the permanent means of transportation, the protagonist of the game has a skateboard, which he can get at almost any moment of the game.
The plot of the game, like the first part, is tied to the criminal Brickster. This time he also runs with the help of pizza. But now the adventure will be much more interesting. After all, this time you have to travel in time. You have to visit the fairy kingdom, help the dinosaurs and do a bunch of other interesting things. And for time travel, they could use the TimeCruisers / TimeTwisters leg series, just dedicated to the topic of time travel.
The game will definitely appeal to Lego fans.
‹
›
Home
View web version