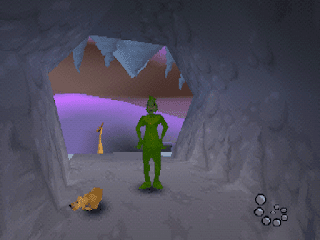 Genre: Action
Gameplay: Puzzle elements
Published by: Konami of America
Developed by: Artificial Mind & Movement
Released: 2000
Platform: PlayStation (PSX, PS1)
A video game based on the movie bestseller "How the Grinch Stole Christmas" starring Jim Carrey, in turn, the movie was based on a book written in 1957 by Dr. Seuss. The plot of the movie and this video game in the platformer genre is as follows. Residents of the fabulous town of Whoville love to celebrate Christmas very much. But there is one who hates this holiday - the green creature Grinch. He lives on a high mountain with his only friend, a dog named Max, holding a grudge against the inhabitants of the town. From childhood, peers scoffed at the unusual appearance of the Grinch. Later, the Grinch and the townspeople developed a mutual dislike. Every year, the Christmas fun and joy of the inhabitants of Ktograd caused irritation and anger in the green hermit. And one day the Grinch decided to carry out an insidious plan - to steal their favorite Christmas holiday from the townspeople ... The game has good graphics, an interesting and funny plot, and is also richly seasoned with a lot of all sorts of mechanisms that can be used.
‹
›
Home
View web version