The Divide: Enemies Within (PS1) 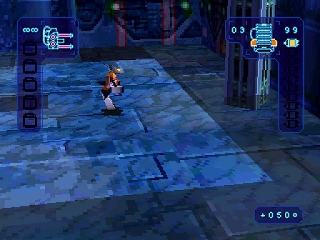 Genre: Action
Perspective: 3rd-person
Visual: 2D scrolling
Gameplay: Metroidvania, Platform
Interface: Direct control
Vehicular: Mecha / giant robot
Setting: Sci-fi / futuristic
Published by: Viacom New Media
Developed by: Radical Entertainment Inc.
Released: 1997
Platform: PlayStation (PSX, PS1)
In The Divide: Enemies Within, the player takes control of a character on their journey to an alien planet. After their planet was attacked, and his partner was frozen and kidnapped by aliens, our hero sets out to find him equipped with a Mech-simulator, in order to investigate, destroy alien organisms and save his friend. The gameplay boils down to exploring eight different worlds with 100 stages in total. You fight in a 3D environment, but overall the game is not 3D, and some of the camera angles are surprising (in a positive way), reminiscent of the levels in the famous puzzle game Kula World. The player wanders through the levels, collecting new types of weapons and power-ups to fight 20 different types of enemies, at the end of the level, the Boss is waiting for you, which are really very difficult to defeat.