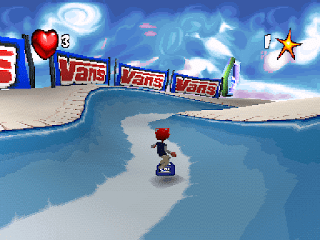 Genre: Action, Sports
Perspective: Behind view
Interface: Direct control
Sport: Snowboarding / skiing
Published by: Psygnosis Limited
Developed by: Psygnosis Limited
Released: 1998
Platform: PlayStation (PSX, PS1)
Happy guys are having fun running through the air on their boards, reminiscent of skateboards. But their idyll was brutally destroyed by the diabolical Krakken. He captured all the happy inhabitants of the planet, but two guys - Xako and Mia managed to stay free. Now their task is to rescue friends from captivity and return happiness and peace to their world. The player will immediately enter the surreal world of Psybadek, where he will have to overcome many levels, find and free his comrades, and finally deal with the Krakken gang. The player must, in the allotted time, get safe and sound to the end of the level-track, overcome obstacles, perform various acrobatic stunts, fight against numerous enemies and collect useful and valuable items.
Forty game levels can be divided into several styles: racing, acrobatics, puzzle solving, shooter, premium rounds and finally freestyle. Events take place in four worlds: Ice, Jungle, Desert and Underworld, differing in the nature of the action and the environment. In each case, the player will face a boss who is a genetically altered comrade of theirs! And if you manage to defeat him, he will again become a cheerful and sweet baby. The boss can be finished off in a fight, but you can also just overtake in a race. Defeating the boss unlocks access to one of eight secret tracks, while well-executed acrobatic tricks increase the player's skill, increase the speed and height of the jump, as well as the power of the attacking weapon.
‹
›
Home
View web version