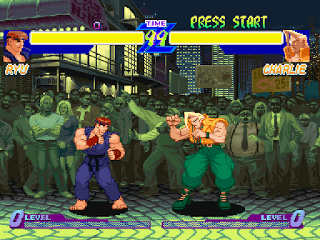 Genre: Action
Perspective: Side view
Visual: 2D scrolling
Art: Anime / manga
Gameplay: Fighting
Interface: Direct control
Setting: Fantasy
Narrative: Martial arts
Published by: Capcom Entertainment
Developed by: Capcom Co.
Released: 1996
Platforms: PlayStation (PSX, PS1), Arcade Machine
The sequel to Super Street Fighter II, as well as a standalone project that is not an addition / update to Street Fighter II. The plot of the game takes place between Street Fighter and Street Fighter II, which explains the appearance in the roster of fighters of both younger versions of well-known fighters (Ryu, Ken, Chun-Li) and the presence of rivals that previously appeared only in the debut game of the series (for example, a kickboxer Adon and the giant Birdie). In addition to them, Guy, a martial artist and one of the main characters of Final Fight, Capcom's beat'em up series, was added to the game, the events of which unfold in the same universe.
In addition to improved graphics and a completely new animation style that refers to other Capcom fighting games, a number of innovations have been added to the old mechanics of Street Fighter, slightly changing the rules by which you have to fight. The most significant innovations include the Alpha indicator, which allows the fighter to carry out a powerful counterattack in response to an enemy attack. It will work only if the block is delivered in a timely manner, of course.
Introduced in Street Fighter 2 Turbo, the "Super Combo" system has undergone major changes, becoming a three-phase system. Now the indicator is divided into 3 divisions and each of its filling (filled in as normal and special moves are successfully completed) means a certain level. The higher the level of the indicator (3rd - maximum), the stronger the final Super Combo that the fighter will conduct.
The game has become friendlier to beginners, adding the ability to choose the type of control when choosing a character: "Mechanics" or "Automatic". The latter is notable for the automatic blocking by the selected character of the most dangerous attacks of the enemy, provided that the player at that moment is not busy performing a combination or attack. The number of automatic blocks is limited. But there is also a minus in the form of a truncated Super Combo indicator, whose maximum level became the first. Of the other little things, it is worth noting the ability to block attacks and the ability to do rolls, landing after an attack on the ground. It also became possible to interrupt the opponent's attack (including the Super Combo), inflicting a series of stronger blows in response.
In the Arcade mode, the player is waiting for 6 random battles and the 7th with his archenemy (the advantage is the dictator M. Bison, but there are exceptions). It should be noted that the presence in the first part of two secret fighters (which became available from the very beginning, starting with Alpha 2), which can be found in the Arcade mode and fight if special conditions are met. These adversaries:
‹
›
Home
View web version