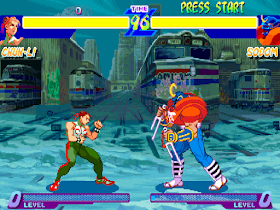 Genre: Action
Perspective: Side view
Gameplay: Fighting
Visual: 2D scrolling
Art: Anime / Manga
Published by: Capcom Co.
Developed by: Capcom Co.
Released: 1995
Platforms: Arcade Machine, PlayStation (PSX, PS1)
In Street Fighter Alpha introduced several new features to the series, which are typical for the subsequent parts of the Alpha line, in particular, the energy scale, more developed compared to the Super Street Fighter II Turbo, the possibility of an air block and counter-attack from the block, and also a characteristic graphic style very close in spirit to the games series Darkstalkers. The plot of the SFA and the series of games based on it is an interquest, being both the sequel to the first Street Fighter and the prequel to Street Fighter II, and accordingly, in addition to some returning from the second part of the fighters, some of the characters of the first part got here, as well as two guest characters from Final Fight and a few absolutely new ones.

As before, Street Fighter Alpha is a 2D fighting game with a six-button control scheme, in which strikes by limbs (three by kicks and hands) are distributed among themselves in strength and speed. The player controls one of the fighters (who usually owns a certain set of basic and special attacks) against the computer or another player.

In the home versions of Street Fighter Alpha, the player is offered four basic game modes:
Arcade Mode - standard for most games of the genre mode, in which the player alternately fights with a certain set of opponents. The last opponent in this mode is the boss, which can be different for some fighters.
Versus Mode - play against another player
Training Mode is a training mode in which a player can set various parameters of the opponent's behavior and practice his moves on it.
Dramatic Battle Mode is a secret two-on-one battle mode based on the final Battle of Ryu and Ken (run by two players) with Bayson from the Street Fighter II full-length movie (in the Japanese arcade version, the instrumental version of the battle theme was used from the film, "Itoshisa To Setsunasa To Kokoro Tsuyosato", later replaced in the subsequent parts of the series by the standard theme of Bayson).

One of the specific features of the game was a modified energy scale, divided into three divisions (as opposed to Super Street Fighter II Turbo, where the energy scale was not divided). As the scale is full, the player can use super-tricks (which, like Super Turbo, are called Super Combo); The power of the used super reception is determined by the number of attack buttons pressed when entering. For example, if you pressed one attack button while typing, the first level super-reception will be activated; if two or two were pressed, if all three are pressed third.
In addition to super-tricks, the game introduced the concept of a special counter-attack from the block, called in the game Alpha Counter (literally from English - "alpha counter", Zero Counter in Japanese versions). Each character has one Alpha Counter. When triggered, a counterattack is accompanied by a characteristic sound and animation. Also, the Alpha Counter at the time of execution absorbs one level of the energy scale.
Also in the game there are two new basic mechanics known as Air Blocking and Chain Combo (also known as Alpha Combos or Zero Combos). The first technique, as the name implies, is to block the opponent's blows while in the air. The second one is the ability to cancel the animation of one basic reception (normal) in another, equivalent to it in power, or more powerful. In addition to the opportunities available in Super Street Fighter II to recover to a neutral position in the event of a throw (the so-called recovery), it became possible to perform similar techniques when falling to the ground.
Battle Modes
In the home versions of the game, the player after choosing a fighter is asked to choose two combat styles, called "Normal" and "Auto". "Auto" is different from "Normal" automatic protection against a limited number of attacks of the opponent (if the player was at the time of the attack). "Auto" mode also offers the possibility to use super-reception, simultaneously pressing the buttons of equivalent impact by hand and foot, but due to the limited to one level of the energy scale.
‹
›
Home
View web version