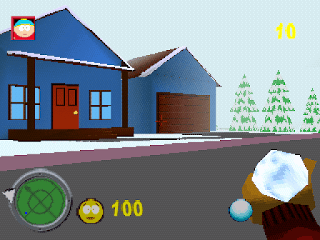 Genre: Action, FPS
Perspective: 1st-person
Gameplay: Shooter
Interface: Direct control
Setting: North America, Sci-fi / futuristic
Narrative: Comedy
Published by: Acclaim Entertainment
Developed by: Iguana Entertainment
Released: 1999
Platforms: PlayStation (PSX, PS1), Nintendo 64 (N64)
The advertising slogan for this game is "Feel like a five year old again". And this call immediately sets in a peaceful mood. What did you do when you were a five year old child? They played in the sandbox, went to kindergarten, did not use profanity. In any case, at this age you obviously did not save the Earth from an alien invasion, did not kill innocent animals with snowballs and did not swear like loaders at a beer stall. But the heroes of this game are busy with just all of the above. The game is a parody of the 3D-action genre (games like Doom, Quake, etc.), and a parody with a strong tinge of black humor. In terms of its graphic design, the game does not at all please with any special frills (and this is despite the fact that the game comes from the Nintendo 64) - neither bright saturated textures, nor complex geometric objects, everything is simple and tasteful (and without it). But on the other hand, the gameplay captures from the very first second.
Something terrible is moving towards the earth from the depths of space. Soon the earthly civilization will come to a natural end. And only a group (or rather a gang) of small children from the American provincial town of South Park can prevent this sad ending. Of course, a child will not hold a six-barreled machine gun in his hands, not to mention a grenade launcher or BFG, a knife or an ax in children's hands is also not a very effective weapon. Therefore, the very first available weapons in the game are ... snowballs, but as you progress through the game, bowling balls, sucker-shooting machine guns, Voodoo dolls and other very non-standard weapons become available to you. You have to roam the streets of your hometown and kill ... turkeys (such birds, don't scare them with Indians), and then go down into the caves, climb the mountains and kill again, turkeys, as well as other giant psychedelic birds. You can kill not only enemies, but various innocent animals that have fallen under a hot hand, or rather under a cold snowball (at the end of each level there are statistics on murders, where there is a special column "senselessly killed innocent creatures"). The kids from the game not only skillfully throw snowballs, but, despite their young age, they swear superbly - in some videos their lines are replaced by the censored “beep-beep”, and when they die, they utter the phrase “Motherfucker”, which does not require translation. The advantages of the game include pleasant unobtrusive country music, and in general the sound design in the game is at its best. South Park is a great way to relax and forget about all your everyday worries for a while.