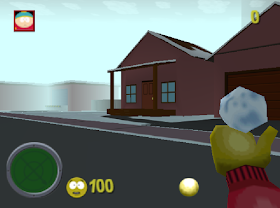 Genre: Action, FPS
Perspective: 1st-person
Gameplay: Shooter
Interface: Direct control
Setting: North America, Sci-fi / futuristic
Published by: Acclaim Entertainment
Developed by: Iguana Entertainment
Released: 1998
Platforms: Nintendo 64 (N64), PlayStation (PSX, PS1)
A game for fans of the animated series. Your little prikolisty arrange in the city a stir with the help of a friend-cook and other characters. Insidious enemies in the form of crazy hens and other reptiles will strive to eat heroes, for which they have an adequate response in the form of snowballs, balls and other children's weapons. In fact, the game is a 3D action game with a funky filling and cool gameplay, and with high-quality graphics.
‹
›
Home
View web version