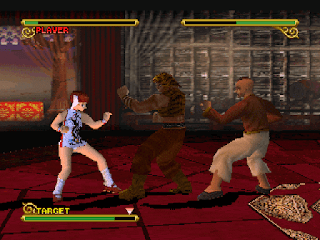 Genre: Action, Role-Playing (RPG)
Perspective: 3rd-person
Narrative: Martial arts
Published by: THQ Inc.
Developed by: Polygon Magic
Released: 1999
Platform: PlayStation (PSX, PS1)
Shaolin is a 3D Fighting with RPG elements. At the same time, the game has a feature that I first saw in the game Fable, namely - you start the game as a young man (or woman), and end up as an old man. The fights take place as usual in the arenas, but before the fight the player has the opportunity to wander among the inhabitants of a particular settlement and chat with non-player characters. A number of characters in the game must be called to battle and defeat the enemy in order to complete the game, while not in all cases the battle goes one on one, sometimes you are attacked by several enemies at the same time. The RPG elements in the game are expressed in the conversations mentioned above, as well as in food, when you eat in a diner, the food not only restores your health, but also improves the appearance of the character. Saving the game is typical of classic RPGs - it's a sound sleep in a hotel. It remains only to add that the game supports multiplayer up to 8 players (in the presence of multitap), both cooperative and against each other. In total, there are six fighting schools in the game, such as Shaolin, Jeet Kuune Do, Tai Chi Chuan, Eight Extremities Fist, Hung Gar, Drunken Boxing.