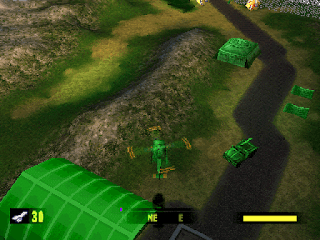 Genre: Action
Gameplay: Shooter
Vehicular: Flight / aviation
Published by: 3DO Company
Developed by: 3DO Company
Released: 1999
Platform: PlayStation (PSX, PS1)
The hot showdown between toy soldiers, which formed the basis of the 3DO Army Man series of games, continues to attract the attention of gamers. If until now, toy fighters fought on the ground, then the new game in the series will make air space the arena of hot fights. You have to take control of a helicopter from the elite division of the Air Cavalry Alpha Wolf Battalion. You can pilot one of the unit's four toy helicopters and take on strategic locations such as the backyard, playground, picnic area and beach. Combat missions include destroying children's toys, bombing anthills, escorting toy trains and more. Your helicopter has not only weapons, but also a winch, with which you can pick up useful items from the ground. The game will captivate you seriously and for a long time - after all, eighteen missions (including secret ones) await you in it. Of course, in the game you will meet not only helicopters, but also all conceivable types of military equipment - land, air and sea. The game will also support a multiplayer mode - you can play together, either jointly performing military buildings, or arranging hot duels.
‹
›
Home
View web version